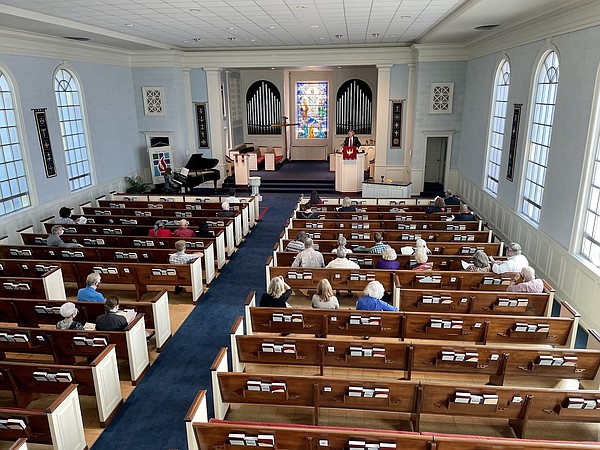 Since covid-19 broke out, there have been many more empty pews in Arkansas, although some long-absent worshipers are starting to return, church leaders say.

“We’ve seen attendance start to increase steadily again, and there’s [some] people who get up to 60% to 70% pre-covid [numbers]“said Bishop Gary Mueller of the Arkansas Conference of The United Methodist Church.

Arkansas is hardly an outlier, according to data from LifeWay Research, which is affiliated with the Southern Baptist Convention.

“A quarter of congregants, those who attended in person before the pandemic, are not back in church on a typical Sunday,” said Scott McConnell, executive director of LifeWay Research.

Since the arrival of covid, “a lot of habits have been broken”, he says.

Numbers are down in the Episcopal Diocese of Arkansas, despite the doors reopening, according to Bishop Larry Benfield.

“Between about 50% and about 75% of people seem to be back to worshiping in person now, as opposed to before covid started,” Benfield said.

Larger parishes in Little Rock and northwest Arkansas have generally fared better than medium-sized parishes elsewhere in the state, he said.

Some of the smaller parishes – those with 15 to 25 people – have returned to pre-covid numbers, he added.

Like other religious leaders, Benfield monitors the spread of the omicron variant.

If the number of covid cases spikes, “I think you’re going to see some people decide to watch worship online rather than be there in person,” he said. “As of now, no congregation has talked about going online only.”

A Gallup poll, which has tracked church attendance since 1939, showed US attendance fell in the first year of the covid-19 pandemic to its lowest level on record; so far attendance has not recovered.

“We are definitely seeing attendance cut in half,” said Pastor Darrell Montgomery of the Second Baptist Church in England.

Before covid, there would probably have been 70 to 80 on hand, he added.

Diagnosing the problem is easier than finding a cure.

Rod Loy, pastor of First Assembly of God of North Little Rock, worries about the long-term effects of the pandemic, not just in Arkansas but across the country.

“At the start of the pandemic, many so-called ‘experts’ predicted that this would be the next great spiritual revival in America. They prophesied that as soon as the churches reopened, people would flock to the church, fill the seats and thousands would come to faith. That didn’t happen. Instead of a great revival, we saw a great apostasy,” he told his congregation in a sermon shortly before Thanksgiving.

Many “Christians in America have completely abandoned the church,” he added.

Even some in the First Assembly seem to have drifted away.

“We are still at 75% of pre-covid average attendance,” Loy said in an email Tuesday.

“Unfortunately, the church in America has allowed itself to be divided by covid. Arguments over face masks, vaccines and shutdowns have diverted attention from the mission and purpose of the church,” he said. he declares.

It is not known how many of the faithful have definitely left.

“It will take us several years to know the fallout,” said McConnell of LifeWay Research.

“Many worshipers have good intentions of returning in person,” he added.

With the proliferation of online options, calculating attendance will become more complicated.

“What we’re trying to figure out is how we’re going to count people coming to church…virtually,” Benfield said.

Given the severity of the pandemic and the threat it poses to public health, it is wise for some to pull back from weekly services and other events, he said.

“I think the leadership at all levels has encouraged people vulnerable to disease not to participate, to stay home,” he said.

At the Madina Institute and Mosque in Little Rock, covid has made restrictions necessary according to its president, Sophia Said.

For some gatherings, attendance was capped at 10 or 15 people. On other occasions, only healthy, vaccinated adults were allowed to participate.

Technology has made participation easier, she said.

But technology can’t replicate the in-person experience, she noted.

“We all need community. … How do we build community without physically being together? It’s been a real challenge,” she said.

At St. Joseph’s Catholic Church in Fayetteville, parishioners can watch Mass via the Internet.

But that’s not the same as being physically present, noted her pastor, Jason Tyler.

“The Catholic Mass, in my mind, doesn’t lend itself as well to online or video presentation” because it is “something of a whole body experience,” he said. “You’re sitting. You’re standing. You’re kneeling. Maybe you have incense. Sometimes you even feel what’s going on.”

Above all, it is a shared experience, he said.

“As Catholics, we place great importance on the Eucharist, on the idea that the bread and wine of the Mass truly become the body and blood of Jesus,” he said. “We want people to be in the presence of the Lord.”

Despite its shortcomings, there are no plans to interrupt live Masses.

For the 54 Episcopal parishes in Arkansas, the technological changes introduced by covid have been enormous.

“We probably had … about three congregations doing something online before covid started. Now the majority of our congregations are online,” Bishop Benfield said. “We believe there will be a continued need and interest in online participation.”

With technology, shutdowns are no longer out of the question, Benfield noted.

At Central United Methodist Church in Fayetteville, the number of people worshiping virtually is significant.

Once the pandemic passes, Vaughan hopes some of the online audience will shift to in-person worship.

“We would like more people to feel comfortable enough to come back to campus, but it’s nice to have the ability for people to pray at home,” he said.

Regardless of where people worship, the mission of the church remains the same, Vaughan said.

“We want to do everything we can to help people experience Jesus, his love, his mercy, his healing and his salvation,” he said.

Bishop Larry Benfield of the Episcopal Diocese of Arkansas, pictured outside Trinity Episcopal Cathedral in Little Rock on December 19, said most of his parishes are now offering their services virtually due to covid- 19. Even after the pandemic is over, “we believe there will be a continued need and interest in online dating,” he said. (Arkansas Democrat-Gazette/Frank E. Lockwood)

A large crowd attended a mass in Spanish at St. Anne’s Catholic Church in North Little Rock. Attendance at Spanish-language services in the Diocese of Little Rock fell from 16,339 in the October 2019 count to 9,351 in October 2020, but rebounded to 13,461 in October 2021. (Arkansas Democrat-Gazette/Frank E. Lockwood)