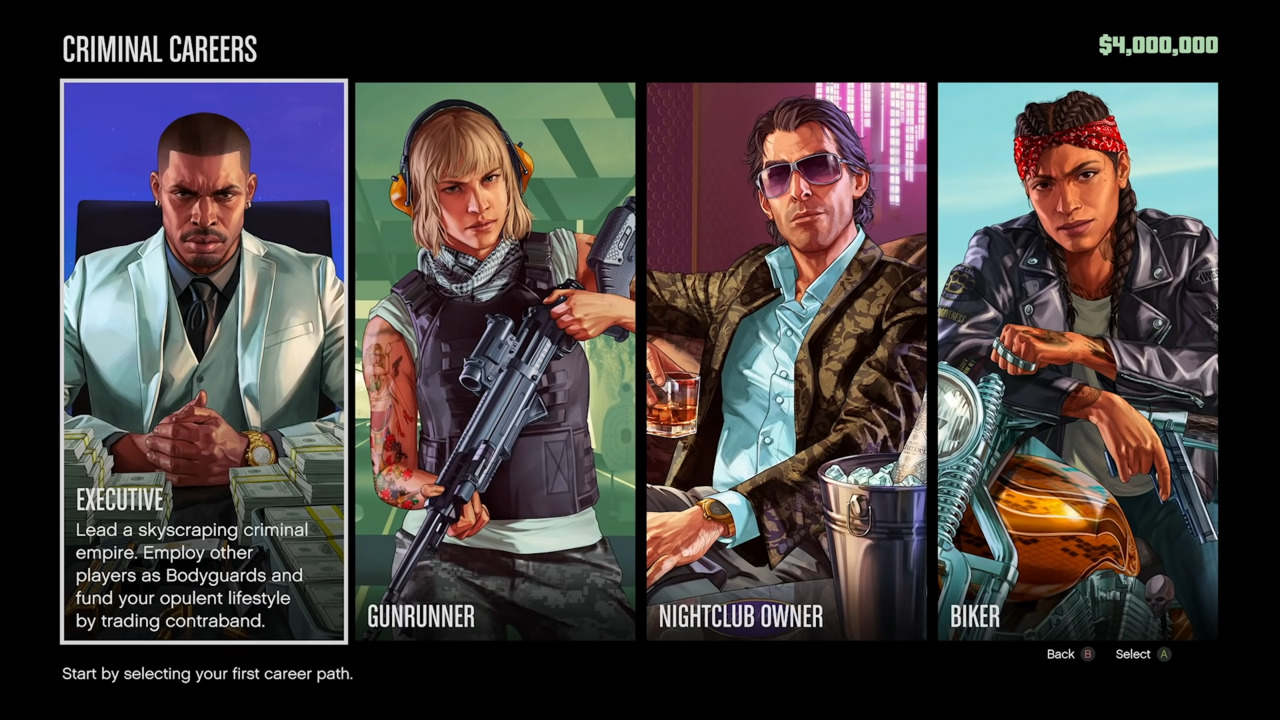 Grand Theft Auto Online has a new career builder that new players can use to kick-start their GTA careers, but it can be an overwhelming process for those new to the streets of Los Santos. Before the career builder existed, new players in GTA Online were thrust into the world without any guidance, forced to resort to guides and other players to learn how to climb the criminal ranks and create their own business. This new process gives players a hefty amount of money and some properties at the start of the game. Here are the best things to choose from.

Which criminal career is the best?

There are four paths you can choose from in the GTA Online Career Builder: Executive, Gunrunner, Nightclub Owner, and Biker. Each offers its own set of starting properties and gear, but Executive is the best and easiest path for new players to choose. This comes with an office and a warehouse which can be used to sell vehicles and special goods, a lucrative method which is still used by many GTA Online players to this day due to its simplicity and payment.

If you want more information on each of the four options, keep reading below to see exactly what they all contain and which upgrades are worth picking up for each path.

The Executive career path sets you up with an office and allows you to choose a starting warehouse to store valuables. This is the best route most players will want to choose, and the upgrades available make this choice even better. You need to choose the Maze Bank West office location and the Derriere Lingerie Backlot location for your warehouse.

The Gunrunner path lets you start with a bunker that generates passive income over time. You either have to steal supplies for the bunker in special missions or just buy it directly with money and then you can start a mission to sell your stock after waiting a few hours for it to be crafted. This is a more complicated affair which is not recommended for new players. The best location is the Chumash Bunker.

The Nightclub Owner profession draws inspiration from the latest GTA Online Four Paths update, allowing you to own your own nightclub that you can use as a front for certain criminal activities. These activities will generate passive income that you can collect from your office once it builds up, and there are also unique missions associated with club ownership.

Unfortunately, this path earns the least amount of money and is not recommended. If you want to live out your nightlife fantasies, however, the betting location is downtown Vinewood Nightclub.

Finally, the Biker path puts you in charge of your own biker club which you can use to start several illicit businesses. The MC alone is not enough to make money, so you will have to buy a separate company to put your employees to work. There are five in total, but the best ones to choose from are Cocaine Warehouses, Counterfeit Factories, and Meth Labs to start with.

Some upgrades can give you a head start on your chosen career path, but they’re not all created equal. If you are going to be a Executive, there aren’t really any upgrades needed. For Arms dealersyou’ll want to grab the Bunker Pack upgrade A or D and purchase the gear upgrade as well as the staff upgrade.

For Nightclub ownersyou shouldn’t get upgrades outside of the Omega interior, as it allows you to get a useful staff upgrade. Bikers should also invest in staff upgrading as this will help you earn as much money as possible in this line of business.

As for Vehicles, all players must purchase the Karin Kuruma (Armored) regardless of the career path they choose. This is an armored car that will protect you from enemies and other players, and you can use it throughout your career in GTA Online. You should also purchase the Benefactor Terrorbyte if you choose the Nightclub Owner path, as it unlocks unique client missions and allows you to run certain businesses remotely.

Finally, the start weapon selection is pretty lame, but you’ll unlock more guns as you level up and grow your criminal empire. For starters, however, you should purchase the Heavy Pistol, a reliable sidearm that will remain useful throughout your career in GTA Online. You should also purchase a homing launcher or other explosive devices as they will come in handy during certain missions and heists. Be sure to stop buying Ammu-Nation to upgrade these weapons as well.

Learn more about Attack of the Fanboy:

LED will hold an online job fair on March 30